The building that previously housed some of Victoria’s most infamous criminals is set for a luxurious revamp. London-based Zaha Hadid Architects’ proposal won out against numerous other firms in an international design competition, and the company has since gone on to collaborate with IB Projects and Malaysian developer UEM Sunrise.

The development of the luxury apartment tower, The Mayfair, has proven even more significant since the passing of founder and arguably the world's greatest female architect, Zaha Hadid, in March. It’s understood that this grand scale project is one of the last developed before her death, making it all the more meaningful in recent architectural history.

In the lead up to the development, IB Projects approached Mesh Direct and asked us to create the building wrap for The Mayfair in St Kilda, Melbourne...

When it comes to a project of this size, there are naturally a number of challenges to overcome. In this instance, the challenges included: a lack of existing scaffolding, an uneven face for the application of the wrap, and the sheer size of the wrap itself (what would become 50 x 40 metres). Plus the nature of the location; with St Kilda Road being a wind funnel, it meant that the safety of our installers was at stake.

Mesh Direct worked hard with IB Projects and the experienced installation team at Visual Exposure to create viable solutions. Together, we engineered and designed a custom frame in order to install the building wrap. This custom made frame created a flat surface for the wrap to sit against, ensuring that the artwork and branding displayed looked its absolute best. We also opted for eight smaller panels and more join points, which meant that the panels were attached more firmly to the building to combat against the high winds of the area.

It was important that the frame and mesh panels sat between the windows, so the accuracy of the planning and execution of the building wrap install was paramount. We worked closely with Visual Exposure to install the design via rope access, and had to ensure the safety of their abseilers.

Given that the install took place throughout July and August, Melbourne’s unpredictable seasonal weather conditions needed to be factored in. Abseilers faced wind, rain and storms during the installation of the building wrap, and so every safety precaution was taken to minimise risk and ensure peace of mind.

An additional part of this brief was that neon lights were required behind the building wrap. This meant another challenge was to line the lights up behind the panels, in order to give the structure a glamorous night look, and optimise the brand’s exposure throughout the later hours of the night. With much planning and careful installation, we were able to achieve this goal.

One of the final challenges we faced was getting the artwork 100% right for such a large scale building wrap. As we said, this banner spans 50 x 40 metres, you can grasp the scale of it by looking at the featured image above and comparing the banner to the size of the balconies on the left... The artwork needed to be high enough resolution at this size for maximum visual impact, so we worked with Zaha Hadid Architects’ designers to make sure that it transitioned from concept to final product as smoothly as possible.

The result of all this collaboration and hard work was an incredibly impressive building wrap that spans across one of Melbourne’s most iconic buildings. The wrap offers an amazing advertising opportunity, showcasing the upcoming unveiling of The Mayfair. 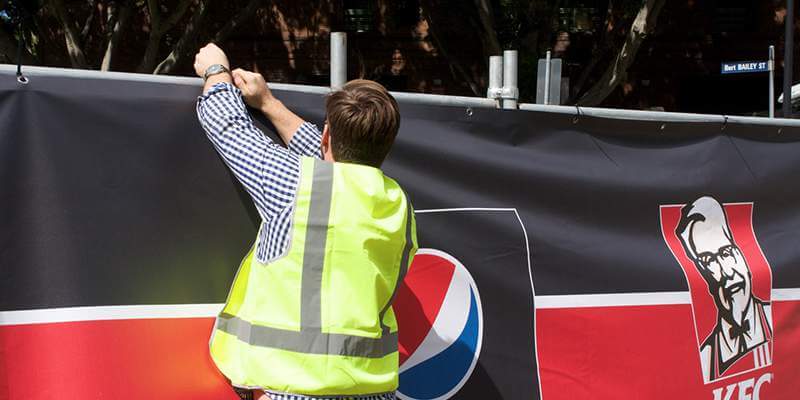 5 Tips to Ensure a Perfect Banner Installation on Temporary Fencing

Visual advertising is still a staple of the marketing world – and for a good reason! Strategically placed in densely trafficked areas, a well-designed banner or billboard will generate interest in your company while you sleep. With tangible benefits for your bottom line, it’s essential to get this part of your marketing strategy right.    … Continued First impressions matter! There’s nothing like a crisp, bright and bold sign to grab the public’s attention and draw them into your story. However, some wind, rain, casual vandalism and a dog’s raised leg later, and your outdoor signage might be left looking a little the worse for wear. In this state, it’s more of … Continued What a great project! Amalgamated Property Group approached Mesh Direct in October of 2019 to collaborate on the hoarding fence, billboard and banner mesh for their new property development project. We were able to indulge our passion for design and marketing as well as our love for original, high-performance answers to challenging practical requirements! Faced … Continued